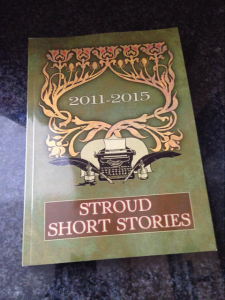 I was really pleased to be invited to read my story The Bronze Garden at the Stroud Short Stories event back in April, and then for the story to feature in the 2011-2015 anthology which came out shortly afterwards. You can still buy the anthology, which was edited by Nimue Brown with a cover design by Tom Brown, via the website.

You can read The Bronze Garden here:

Lots of white feet: that was the first thing that struck her. A shifting carpet of blank soles, as she lifted her head from the lawn.

Lots of white feet (brown smudges at ball and heel and toe, some toenails of questionable hygiene), and no doubt many other white bits, though Debbie was very focussed on not looking at those.

Just thinking about that made her whole body blush. This was new too: blushing all over. It felt almost animal, like a gibbon announcing its fertility with a flash of blue bottom.

‘Done one of these before?’

Oh God, she wasn’t ready for this. When she’d seen the ad in the paper, it’d all seemed a bit of a laugh. Something to stir her mother up with. Naked sculpture, in a crowd? You know what they’re all after. They’ll be trying to get frisky with you before you’ve even got your knickers off.

He was certainly looking for something, this man, whose face was on her shoulder, but perhaps just an answer to his question. He had fair hair, wispy, too long at the sides, and a dark mole that must rub on his collar. If he wore one. Funny how difficult it was to fit a person into your world when they hadn’t got a stitch on. She’d struggle even to age him.

‘I did Dublin and York last year. York was a sight: two hundred of us, down the steps of the chapel and across the quad. One folded over the next, like napkins.’

‘What did he call that?’

‘“Retreat”, I think. Not sure why. They never mean much to me, these arty names. I can tell you though, after three hours starkers in the Yorkshire winter, parts of me were retreating, if you don’t mind me saying.’

See? she could hear her mother say. Five minutes in and he’s already talking about his unmentionables.

‘Right, of course,’ she laughed. ‘Not a problem today, I suppose.’ Mid May, but the grass was parched beneath them, prickling in the small of her back, sandy earth mobile between the roots. It hadn’t rained for weeks.

‘Don’t I know it. This heat, there’ll be chafing later, I’m sure.’ He laughed.

She looked round for someone to save her, and was freshly shocked by the sea of nakedness. Impossible to know who to rely on. It was disconcerting. A woman with tight black curls shifted her cheek on Debbie’s stomach, on that soft bit of flesh that was a menace when her jeans had been through the wash. She caught Debbie’s eye for a moment, looking away without smiling.

She considered lying, then just nodded.

‘Other half not fancy it?’

He went on without waiting for an answer. ‘My wife won’t come, either. She did fly over to Dublin with me, that first time. It was in the stadium, Croke Park. You might have seen it on the website.’

‘They’re all on there. You should have a look. Like “Where’s Wally”, but it’s all arms and legs and in-betweens, and you’ve no idea if that’s your bottom or the one your wife wished you had.’

‘Not that there was anything on show, mind. We were all lying face down. Eileen was sat up in the stand, just behind where the press box is on match days. Couldn’t argue about the view. She didn’t take to it, though. Said it put her off her Scotch egg, seeing all those bottoms.’

‘I suppose it would. Does she mind you doing it?’

‘She’s got her thing. I’ve got mine. We’ve always been like that.’

A seagull drifted overhead, leaving behind its mocking cry.

‘Can I ask you to stand up now, and congregate on this side of the lawn? Get in amongst the Hepworth pieces, please,’ the voice on the megaphone interrupted, ringing off the siltstone cliffs around the bay. ‘Those up this end, don’t be afraid to engage with the sculpture. That was what she wanted. Get involved. Become part of it.’

Debbie was carried by the crowd towards a huge bronze, planted in the merciful shade of an apple tree. Like a great discus split in half, shapes carved and cut from its form. The man with the megaphone – the artist? No-one had said – draped her through one of the holes, like a piece of cloth, and moved on.

‘I’m Steve, by the way,’ said the voice, from somewhere near her right buttock.

The bronze was blissfully cold against her skin. She felt goose bumps rise across her chest, and forgot about her naked bottom for a moment.

‘Debbie. And I don’t have another half.’

‘What brought you here, then? You don’t sound local.’

A desperate bid to do something she’d feel? Something to tell the grandchildren? Get a rise out of Mum? Something to make her feel human again?

‘Just saw the ad. I knew I’d be down this way, visiting.’

‘Found yourself with a spare hour, and a bit of modelling with your kit off seemed like the obvious filler?’

She leant her lips against the cool of the burnished metal, tasted it with the tip of her tongue. Perhaps he was alright, Steve. She wondered what he’d look like with clothes on.

‘There’s a few of us going on, after. Drinks at the Ship, in town. You’d be welcome to join us, Debbie.’

The church bells rang out four o’clock. The sun eased a fraction.

‘Go on. It’s a good crowd. You meet all sorts on these dos.’

The sea of skin rippled across the lawn as a hundred heads turned. A woman in a black leather jacket was at the French doors. She bumped down the shallow step and made her way towards the bronze, her chair twisting this way and that as she wrenched the wheels across the grass. Limbs flinched and shrank back to make a path.

‘Steven Marwick. I should have known I’d find you here.’

Debbie wondered how she’d recognised him in amongst the anatomical jigsaw.

‘I had to ask Mr Price from the corner shop to help me with the ramp. Mr Price, so old he still talks about shillings and tuppence, for Christ’s sake. I was worried he might break.’

‘Of course you did. Just slipped your mind, I expect. Like my check-up last week. Like you forgot to come home Sunday night, in fact. Have you left me, Steve, and forgotten to let me know?’

He was silent, for a beat too long. A crow squawked on the roof of the summerhouse.

‘You really are a low life,’ Eileen said, spinning her chair. ‘I hope today’s little grope was worth it. Come and pick up your crap at the weekend, or you might find I’ve forgotten not to leave it out for the bin men.’

‘Eileen,’ he called. If she heard, she showed no sign, and he didn’t try again.

‘Sorry. Since the accident, she’s been very angry.’

‘Don’t apologise to me.’ Perhaps she should move her flesh from his – was that his hand across her thigh?

‘Okay! That’s it, folks,’ said the man with the microphone. ‘Thanks for your time today. Shots online by Friday. Take a peek. Any feedback much appreciated, as ever. You’ve all been amazing.’

Released, she felt naked again suddenly, desperate to get to the cloakroom, where their clothes lay in apologetic piles.

‘You still on for that drink?’

Naked figures began to slip away between the trees, disappearing amongst the bronze forms, as if they had never been there. The sprinkler had been switched on at the edge of the lawn and Debbie stretched her feet across the wet silt, feeling it surge between her toes as she stood up. She looked across to a huge sphere that was hollowed to hold a second shape; like a nut, or an unborn child. The light through the trees played inside its shell, making it pulse with life.

That was what she should have said to him, but she hadn’t. Instead, she had nodded, and now she walked slowly across the lawn, watching the freckles on Steve’s shoulders as he strode ahead of her. The seagull’s mocking cry came once more from above, as she stepped over the threshold and away from the garden.