A while back I responded to a call for submissions from InShort Publishing Co, a new Australian firm who were looking to launch a series of short stories, each as an individual pocketbook. I’m so glad I did – today I received the final proofs of my story ‘Long-gone Mary’, which is No 2 of the 18 book series!

It’s been a fascinating exercise, moving through the editing and proof reading process, and I’m so pleased with the result. The team at InShort Publishing Co are great – it’s been a pleasure working with them – and they take their book design seriously. Each of the individual books sports its own unique pattern, in matching two-tone yellow. It’s been fun spotting some of the other 17 authors on Twitter, several of whom have swapped their avatar for the two-tone yellow cover design from their own InShort story.

Long-gone Mary is about two girls, living in the same place, sixteen centuries apart, and the parallels between their lives. For Long-gone Mary, a Romano-British noblewoman, things don’t turn out so well, so as we follow Mary Arkell through her modern day trials, we have to hope that she fares better.

The character of Mary Arkell and her life-story are obviously works of fiction, but much of Long-gone Mary is based on historical fact, and there are fascinating stories even further beneath. Long-gone Mary explores some of the history behind the huge Roman villa that lies under the village of Woodchester, near Stroud, and in particular the incredible mosaic – the Orpheus Pavement – that formed the centrepiece of that 64-roomed mansion.

Woodchester Villa was occupied from the early 2nd to the late 4th centuries AD. It was first excavated by a Gloucestershire antiquarian called Samuel Lysons towards the end of the eighteenth century, and has been periodically uncovered since, but nothing of the grand Roman villa is visible above ground today. If you walk about the tiny, quiet Cotswold village, and the disused churchyard where the mosaic lies, you’d never know that a warren of courtyards and staterooms lay buried beneath your feet.

The Orpheus Pavement – which depicts Orpheus, legendary Greek musician, poet and prophet, charming birds and animals with the sounds of his harp – is one of the finest and largest mosaics in Europe, so it is particularly tragic that it remains out of public view. Sadly (speaking as an archaeology graduate) this can be the way with mosaics, which are very costly to preserve and display, and keeping them in situ does sometimes end up being the safest and best place for them, once they have been thoroughly recorded through excavation. You can see contemporary articles about the various uncoverings of the mosaic since the 1950s in this great photo archive put together by Stroud Local History Society here.

For two Gloucestershire builders, though, this just wasn’t good enough. Bob and John Woodward visited the mosaic when it was last revealed to the public in 1973, and were inspired to build a complete replica when the traffic chaos caused by 140,000 visitors to the tiny village of Woodchester that year meant it was unlikely the mosaic would be uncovered ever again. It’s a remarkable story: these two men, neither of whom had tried mosaic-making before, painstakingly constructed an accurate, 1.6 million piece replica of the Pavement, which then went on public display, first in Wotton-under-Edge and then at Prinknash Abbey. This was all the more remarkable given that Bob Woodward’s son Robert was suffering from leukaemia and, in his memory, Bob founded the organisation now known as CLIC Sargent, the UK’s leading children’s cancer charity, at around the same time. You can read some of Bob Woodward’s story, including extracts from the biography ‘Bob the Other Builder’ written about him here. Bob, now in his early eighties, recently received an OBE for his tireless commitment to fundraising for serious childhood illness.

For the mosaic, the story didn’t end there, as Mary Arkell found out in Long-gone Mary. As this interesting Bristol Post article about the story reported in 2010, the abbey at Prinknash had decided at that time that they were no longer able to house it. Various campaigns were mounted to keep the replica locally, but in the end it was sold at auction to an anonymous bidder later that year, as this BBC article explained. It had been previously valued by the British Museum at £1 million but, incredibly, the final sale price was a mere £75,000. The only information I could find about its current whereabouts was a suggestion that it remains in private hands in the United States, a great shame for the community who tried to secure its future locally, and for interested visitors who can currently view neither the replica nor the real thing. 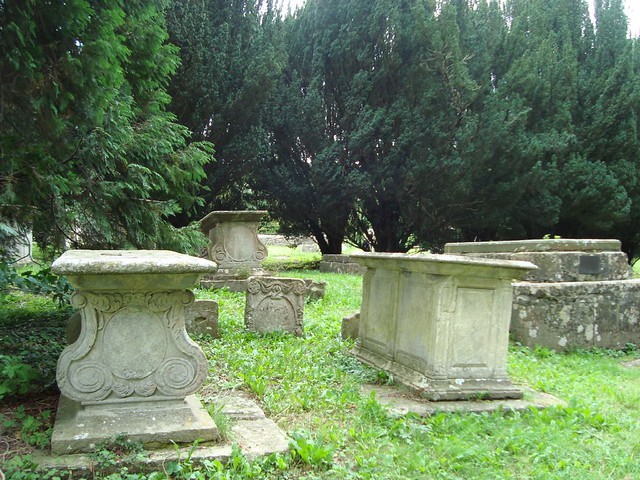 “Woodchester…old cemetery” by BazzaDaRambler is licensed under the Creative Commons

The history is amazing, and I hope you’ll enjoy the story it inspired in me. Long-gone Mary, like its 17 companion volumes, will only be available from the website of InShort Publishing Co. They hope to have the online shop up and running around the end of this month, but if you’d like to be kept posted, you can sign up to be notified of the launch here. If you read it, please do let me know what you think!