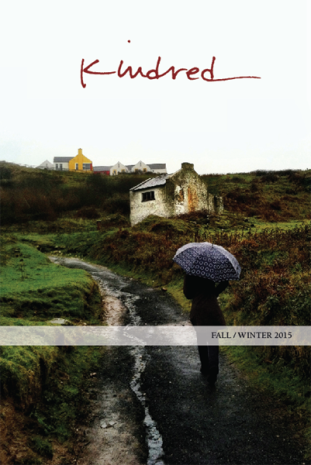 The Wetshod Child is the name of a story I have in the upcoming autumn/winter edition of Anchor & Plume’s Kindred magazine, a gorgeous literary mag from a small press in the American deep south, that celebrates language and place.

I was really excited to be accepted by Kindred because I’ve admired the magazine since my friend Laura shared some of her beautiful photography in Issue 9.

The Wetshod Child is a modern interpretation of an old Somerset folk tale about a childless fisherman who hears the cries of a baby from a clifftop, and ends up bringing up the mermaid child with his wife as their own – as told by a woman “in a Watchet teashop on a wet day in about 1916”. The feature of that story that stood out for me was that, while the child seemed normal enough, the couple couldn’t ever get her dry. In a BBC dictionary of Somerset dialect, I found the word ‘wetshod’, meaning wet-footed, to use in the title. I really enjoy exploring local dialect and using it to add colour to a story – in this case, there were so many fantastic and inspiring Somerset phrases – from hunky punk to thunder box to nestle tripe – it was more a problem of not getting too carried away!

In The Wetshod Child, as in the old folk tale, the couple are on borrowed time: eventually the sea people will return for their own. In my case, I used the return of the Severn Bore (the periodic tidal surge that sweeps up the Severn Estuary, although taking some oceanographic and climatic liberties as to its effects along the Somerset coast…!) to be the event that precipitated the climax of the story.

The sea people…my Scottish writing mentor Clio Gray (I want to talk more about Clio, and the experience of working with a writing mentor, another time) calls them selkies; for the Irish, they are merrows; in Somerset they call them sea morgans, and many of us would call them mermaids.  It’s interesting that half-human aquatic creatures crop up in the folklore of so many cultures, perhaps answering some deep held fear and curiosity about what lies in the deep. Singing is a common theme, often to lure men to places they shouldn’t go, and mermaid sightings are often said to foretell doom. The ancient Assyrian fertility goddess Atargatis was supposed to have transformed herself into a mermaid to atone for having accidentally killed her human lover, and it’s said that Christopher Columbus witnessed mermaids swimming in the Caribbean. But whether a mermaid for you is a flaxen haired sea-maiden singing from the rocks, or something altogether darker and more animalistic, a quick glance at YouTube will confirm that there are plenty of ‘real’ sightings going on today!

Issue 10 of Kindred is now available for pre-order. If you happen to read The Wetshod Child, I hope you enjoy the story. If I can tempt you with the words of my writing mentor: “I usually groan when I realise I’m reading a selkie story, but you drew me in”!